The Human costs of no parole/supporting Documents IV


Supporting Documents Part V
The most compelling reason for fixing our parole policies, however,
are not financial
As these old law prisoners get older, their continued status as prisoners becomes more
and more absurd and tragic. Not only is the taxpayer paying exorbitant bills to hold people that are no longer a risk to society but that money is not buying good or humane treatment. Prisons are not built to house elderly humanely without building expensive hospice units and building those for people who are no longer dangerous and should be home is beyond understanding.
I recommend the reading of one of the many excellent studies on this national crisis
of the elderly. We can be out front in showing a solution because we do not have to enact new statutes, instead we need to ensure that the ones we have are properly
implemented by putting in place PAC rules that ensure stricter compliance with the intent of sentencing judge and legislators. 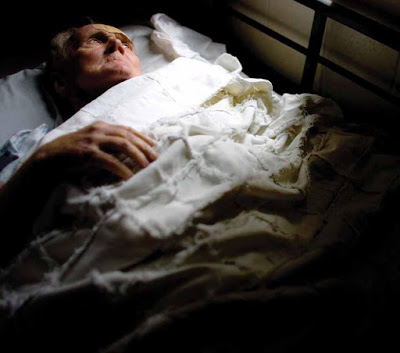 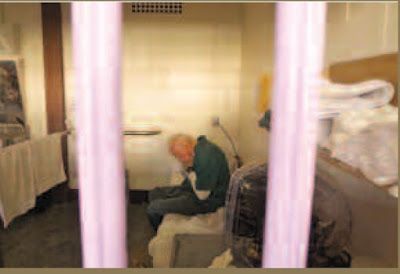 From 2012 Human Rights Watch study "Old In Prison:
"Life in prison can challenge anyone, but it can be particularly hard for those whose minds and bodies are being whittled away by age. Prisons in the United States contain an ever growing number of aging men and women who cannot readily climb stairs, haul themselves to the top bunk, or walk long distances to meals or the canteen; whose old bones suffer from thin mattresses and winter's cold; who need wheelchairs, walkers, canes, portable oxygen, and hearing aids; who cannot get dressed, go to the bathroom, or bathe without help; and who are incontinent, forgetful, suffering chronic illnesses, extremely ill, and dying.
This is an excellent study of our looming crisis of the-elderly in prison. Unlike other states- we have a clear and easy fix- change the PAC rules to allow safe release of parole ready old law prisoners, click for link to online study. https://ffupstuff.files.wordpress.comI2O 14/1 2/hrw-old-in-prison.pdf.

Impact on the young , minority and


other programs like college. But our policy also devastates families and communities and yes,
increases crime. Wisconsin is way ahead in this one also- infamously. A few years back Wisconsin was


named as the state that incarcerates the most African American males. Significantly, Milwaukee has


often been also named as the city with the poorest math and reading scores. Last year UWM


Community. Here is the heading of their study and its opening statement. View online at: 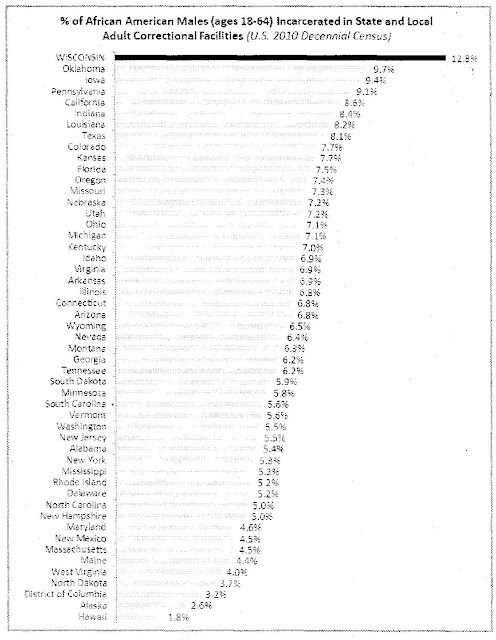 download Milwaukee black Imprisonment study on PDF
Wisconsin has highest black male incarceration rate in U.S. Half of African American. men in their 30s in Milwaukee County have been in state prison..
(from, study introduction) "The prison population in Wisconsin has more than tripled since 1990, fueled by increased government funding for drug enforcement (rather than treatment) and prison construction, three-strikes rules, mandatory minimum sentence laws, truth- -in-sentencing replacing judicial discretion in setting punishments, concentrated policing in minority communities, and state incarceration for minor probation and supervision violations. Particularly impacted were African American males.
Notably 26,222 African American men from Milwaukee County have been or are currently incarcerated in state correctional facilities (including a third with only non-violent offenses), and another 27,874 men (non-offenders) have driver's license violations (many for failure to pay fmes and civil forfeitures) preventing them from legally driving."
Study's conclusion: over- incarceration increases crime.
It is easy to see the impact of our lock- em-up- and- throw- away -the -key policy through the younger T-I-S prisoner. Many of our old law prisoners have children who only know their father and mothers as prisoners and now many these now young adults are having children. As most Milwaukeans know and this study shows, the absence of fathers is a major factor in crime in Milwaukee - over- incarceration causes crime. And over and over again we hear from TIS prisoners that they grew up without their fathers; that their only model was the drug dealer on the corner or the movies.
Below are the words of a 17 waiting for his father who has served 17 years of a 50 year sentence for the crime of robbery in which no one was hurt. He has been eligible for parole for the last 4 years, has done all his programming and has been well behaved. Like most of the other old law prisoners, the reason given for no parole is: "Not enough time served for punishment" 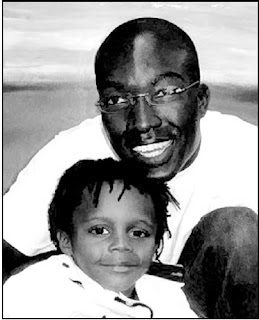 "Hello its me Robert!! Im a senior at park high school. Im 17 and I don't have a good relationship with my dad but I would love a relationship with him. I would love to see him at my prom and graduation that's all I want really. I haven't seen my dad in 2 years and I would love for him to come home. I would like to have a father in my life now and I go to prom on May 17th and I graduate June 8. My relationship to my father is not what I want I really want
to see him and I want him to come home. The reason why I want him to come home is because he hasn't been a father in my life for 17 years and I want him here. I believe he should come home because he been in therefor 17 years and its time for him to get out of prison. I love my dad and I believe he deserve another chance at life and you should put him on parole house arrest or something just let my father come home where he belongs. We'll that's all I have to say so i end this with a goodbye and I pray you over look his case and send him, home. Goodbye

We can still make the shift to a wise policy. Punishment is a viable part of incarceration, yes, but we have taken it to an extreme. And prisons have become a jobs program in this country and this is wrong. In recent decades, our society has refused to accept responsibility for its problems and has gone for easy solutions, giving quick sound bites in answer to any resistance- and we have literally dumped our alienated, poor and mentally ill into our prisons. In the 90's the legislature gave Departments of Corrections plenty of money to build and warehouse but no resources to rehabilitate. And the mental hospitals were closed, making our the prisons the defacto nation's mental health hospitals.
Now there's no federal funding, the boom is gone and it is time to rethink policy. I ask you to help the DOC release this albatross around it's neck- let the rehabilitated old law prisoner free by adopting these new PAC rules. Most of these inmates have families, friends or facilities to go to upon release and we will ensure we help find adequate placement for those who need placement help. Most of the elderly are eligible for Medicaid and Medicare and will be better served by those institutions set up to care for them. In turn, the money saved can be use to make the work in the prison more fulfilling for staff as the Wisconsin prison system begins to use its resources to fulfill its rehabilitation mission.