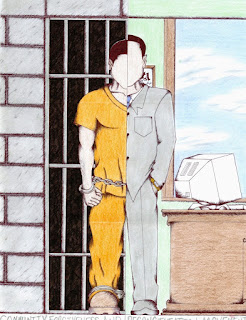 Wisconsin is holding over 2,500 rehabilitated, parole eligible men and women at taxpayers expense of between 50 and 100   thousand dollars a year per inmate.
Holding these men and women is breaking budgets of both  WI and Department of Corrections (DOC)
and is a outrage against our standards of human decency and the world's evolving standards of human rights. We need to tell the DOC and the world that Wisconsinites DO believe that people change and we have had enough of our state's revenge only corrections policy.

Look at list On right side of post for listing of good backup info and ideas. Some of the items here:      Crime diminishes with age
How we  got into this mess
The present system no parole for old law prisoners is corrupting the Prisoner system and bankrupting Wisconsin.


ACTIONS
1) Bringing the issue of Old Law Prisoners to the general public-
COMING SOON-
a)ONE GENERAL PETITION FOR ALL old law prisoners asking for reinstating for meaningful parole hearings  and giving guidelines for what that would look like.
b) Template for letters to your legislators- this is the best action for putting pressure on the DOC and Parole -through you own legislators.

3) Many families of prisoners have launched their own petition for their loved ones. We will gather all and send to the powers but they also will use these at parole hearings and to get help from their loved ones.

click to view Petitions by category :Here is a short summary of petitions that are posted and links to their petition. Please sign those you can.

4) MEDIA Campaign: we are educating the public about these prisoners by starting with the most absurd and heartrending cases first- because Wisconsin is the worst for so many things, we will  make this campaign local and national
a) The  elderly, the sick.  55 of age is elderly for  a prisoner since because of harsh conditions, prisoners age much faster than free folk.
b) Those prisoners, citizens of other countries. who are slated to be deported upon being paroled. All are eligible for parole- why do we keep them?

c)Hundreds of inmates who have completed all programming and many have college degrees , garnered before Pell grants stopped. These are truly rehabilitated people who are needback in their communities.  Their records are good and they are kept in prison with contradictory and unwritten rules.
d) Juvenile offenders are people who committed their crimes when children . Many were given life sentences and the courts have ruled they were not responsible as their brains were not developed enough to think long term or consequences. For those eligible for parole, we ask that it be granted. For those who were given"life without parole" we ask that their sentences be reduced in a modification of sentence legal action.
example blog we are working on:(not finished)
5) " LIFERS"
We have found that few people want to talk about releasing prisoners, no matter how rehabilitated. We still judge people on their crime-no matter when it was done. We have to get around that for many of these prisoners are "Lifers" and will die in prison unless parole is restored. It is ironic that lifers- those sentenced to "life" because  a life was taken, are the least likely to reoffend of all the classes of prisoners. And for old law prisoners, "life" meant they would be eligible for parole after 13 12 yeas and if their behavior was good , they would be released.
Coming:soon: data on the release of lifers before parole was slowed (2000) and then virtually stopped.

6)We are trying to clearly show the human face of the horror that is perpetuated in our name . For details on the program and /or to add your own petition, email or call pgswan3@aol.com, 608-536-3993.