Most Old law Prisoners are not dangerous/Crime declines with age


Crime reduces with age
Here we intend to show why giving a true second chance to old law prisoner is in the
best interest of the DOC and the taxpayer, and the public at large
1) Old law inmates are all over thirty in the main are not dangerous.
a) Studies show that most non corporate crime is committed by people under thirty. Period. A recent and incredibly detailed study by the ACLU went state by state to get data and found that after 30, the percentage of prisoners to reoffend was 6 %, after 55 it dropped to zero. This and studies by the FOB and other organizations showing similar findings need to be given much consideration when deciding whether an mature or elderly inmate, once violent, is still a danger. People change. All old law prisoners are over thirty (crimes committed 15 plus years ago) and about a third of our nearly three thousand old law prisoners are over 55. Many are fathers, grandfathers. 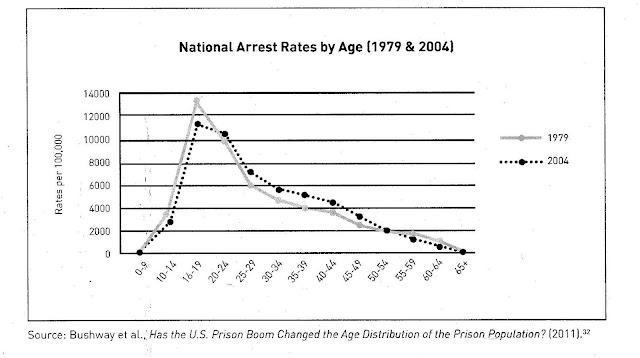 Crime Declines Precipitously With AGE for ALL Crimes Research has conclusively shown that long before age 50, most people have outlived the years in which they are most likely to commit crimes. Even when examining data on arrests that may not lead to conviction or indicate guilt, this holds true. For example, the figure below shows the percentage of individuals arrested nationally by age in 2004. Less than6% of individuals ages 3 0-3 4 were arrested ( nearly 14 % for 19 year olds), whereas a little over 2% of individuals ages 50-54 were arrested and almost 0% of those age 65 and older were arrested. This trend of decreasing crime rates from adulthood to old age has held constant overtime, as shown by the 1979 arrest curve.
Here is a quote from the Pew Charitable Fund(2012) on the subject:
"Researchers have consistently found that age is one of the most significant predictors of criminality, with criminal or delinquent activity peaking in late adolescence or early adulthood and decreasing as a personages. Older offenders are less likely to commit additional crimes after their release than younger offenders. Studies on parolee recidivism find the probability of parole violations also decreases with age, with older parolees the least likely group to be re-incarcerated. A 1998 study found that only 3.2 percent of offenders 55 and older
returned to prison within a year of release, compared with 45 percent of offenders 18 to 29 years old.21
Likewise, a 2004 analysis of people sentenced under federal sentencing guidelines found that within two years of release the recidivism rate among offenders older than 50 was only 9.5 percent compared with a rate of 35.5 percent among offenders younger than 22. Given these statistics, releasing some elderly inmates before the end of their sentence poses a relatively low risk to the public."
Another reason to reevaluate the "risk to the public" of old law prisoners:
VIOLENT CRIMINALS vs prisoners convicted of a violent crime
vs old law prisoners.
When Truth in Sentencing came in and in order to receive the VOTIS money, WI had to certify that it was keeping "violent Offenders in" and that it had enough violent offenders to qualify for the funds. ALL old law prisoners were swept under that appellation when in truth, many offenders were guilty of being "party to a violent
crime" or were part of non violent crimes,( drugs etc). We have many people classified as "convicted of a violent crime" who were not "violent offenders" and never wielded a weapon nor hurt anyone physically. On the face of it, it wouldn't appear to be much of a distinction, but whether a person has ever actually physically harmed someone by their actions is huge as it relates to risk to the community. In an open records request response the DOC acknowledged that of the 2887 old law prisoners ,"957 are serving a sentence for a violent crime," instead of labeling them "violent offenders."
We believe that the above information and the data from many studies showing dramatic risk reduction with increased age, gives the DOC a mandate to change present PAC rules to eliminate the power of the parole commission to use overly subjective criteria. With the addition to the hearing of advocates and other testimony from those who know the prisoner and can testify pro and con, the parole deciders will have the broad view needed to accurately and fairly assess the inmate's readiness and the rehabilitated prisoners will be released to society where they belong.