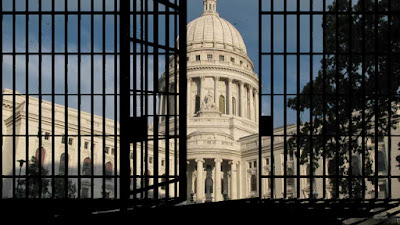 On Thursday July 18, Forum for Understanding Prisons (FFUP) called a day of action in Madison for people serving inappropriately long sentences because they were sentenced under the “old law” before Truth in Sentencing (TIS) came to Wisconsin in 2000.

Such people are still required to go before the parole commission, while everyone else has a pre-determined sentence. Prior to TIS, the parole commission would often release people to community supervision after doing 25% to 30% of their sentences, especially if they’d completed programs and had made it through incarceration without serious incidents.

In recent years, the parole commission has been granting release less than 5% of the time, usually based on criteria totally unrelated to the imprisoned person's conduct, program completion or mindset. This runs counter to the sentencing judge’s intentions and undermines the design and purpose of the parole system. 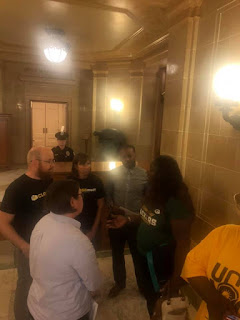 On our day of action, we visited legislators and delivered a petition calling for rules changes under Statute 227.12. The rally component was canceled due to rain. Statute 227.12 authorizes groups to petition an agency requesting it to promulgate new rules. The agency must respond to the petition by either accepting the rules, or rejecting them in writing.

FFUP developed the proposed changes based on input from people serving under the old law. These rules changes will close loopholes, remove made up standards, and replace vague subjective language that the parole commission routinely uses to deny people release. You can read the full petition here.

Governor Tony Evers has stated an intention to fix the old law problem, which received much attention after the 53206 documentary and Baron Walker’s extraordinary release. Evers appointed John Tate, a former social worker and reformer from Racine to be Parole Commissioner, which led many to believe that reform and relief was on it’s way.

Unfortunately, Tate has been overly cautious. The commission continues to deny people release based on unfair criteria, such as awaiting programs or security level transfers, factors which the Department of Corrections (DOC) controls. As a result, aging people continue to be denied parole and to serve much longer than their original sentencing judges' intended. 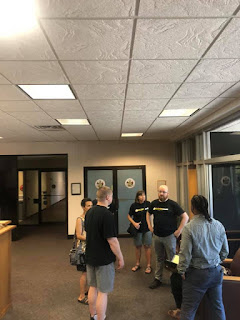 We delivered the rules change petition to Commissioner-designee Tate and gave copies to DOC Secretary-designee Kevin Carr and Governor Evers. Governor Evers’ policy adviser Katie Domina received the petition and a letter from Davinia, a woman whose fiancee was recently denied release. Katie listened to our comments and stories and said she would share them with the Governor, but the decision on the rules change was up to the impacted agency, that is, the parole commission. We reached out to the Commissioner by phone and email and will follow up this week.

Under statute 227.12 if the commission rejects the rules change petition, they must do so in writing. That means our action requires them to either fix the parole rules, or publicly admit they aren't willing to do so.

To support the proposed rules changes, please sign this online petition. We will continue to share the signatures list with the parole commission as they review the rules changes. 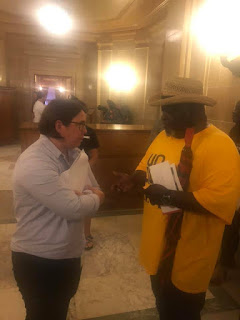 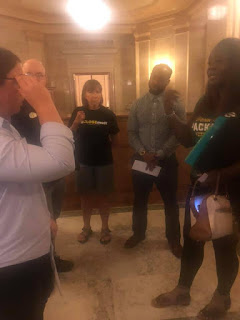 In addition to the petition delivery, we also met with legislators. One explanation for Commissioner Tate's slow progress may be that he fears his confirmation being blocked by the republican-controlled senate. Thursday we started the day with legislative visits to demand his confirmation as well as the confirmation of DOC Secretary Carr. We met with two legislators and aides from 3 others to discuss this and a variety of other issues.

Senator Van Wanggaard (R-Racine), the chair of the senate Judiciary and Public Safety Committee said he supports these confirmations, that he knows John Tate and approves of the work Carr has been doing. He expects the confirmations will go through in September, allowing Carr and Tate to do their job without fear of partisan retaliation or legislative gridlock. 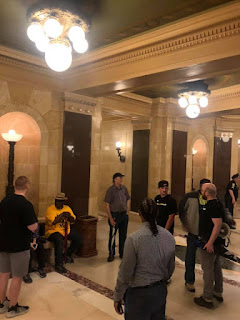 We discussed a variety of other issues with Senator Wanggaard, from crimeless revocations to sentencing lengths, to programming and conditions inside the prisons. We were glad to explain the negative impacts of crimeless revocations and investigation holds, and he sounded supportive of reform.

At the same time, certain views expressed by Senator Wanggaard were very disappointing to hear from someone in his position. For example, he said that people on community supervision “have no rights”, which is both factually untrue and morally repugnant. People on community supervision have restrictions placed on their rights, but some rights are still protected. Moreover, the restrictions that do exist are a serious problem.

There are over 60,000 people on supervision in Wisconsin, over 7 million in the US. Restricting so many people’s rights creates a legally designated second class of citizens who are vulnerable to abuse and subject to greater infringement on their liberties by government agencies. People on such restrictions are disproportionately black, brown and indigenous because those are the communities targeted by the prison system. For the head of a senate tasked with overseeing and creating prison policy to blithely overstate the situation by saying these tens of thousands of racially designated people “have no rights” shows either a sad lack of understanding or a disturbing support for the institution of racial caste in our society.

Senator Wanggaard also seemed unaware and confused about fundamental aspects of the prison system. He objected to the suggestion that people are sometimes forced or pressured into taking plea bargains when they’re not guilty. He refused to grapple with the fact that most people eventually do come home from prison. In fact, 85% of those currently incarcerated will be returning to their communities in the next five years. When asked if traumatizing such people in prison would negatively impact public safety outcomes for those communities, Senator Wanggaard interrupted the question, shook his head and told a story about a dog training program available to a tiny fraction of people held in one prison. We’re accustomed to such reactions from people who have not deeply considered the prison system, its effects or impacts. It was disturbing to see such willful ignorance it from someone with actual authority over prison policy.
Posted by Ben Turk at 6:25 AM No comments: